Six times holder of the prestigious title of World Champion Blacksmith, Grant Moon AWCF is arguably the most famous farrier. He has shod in no less than 36 different countries and delivers clinics across the world. 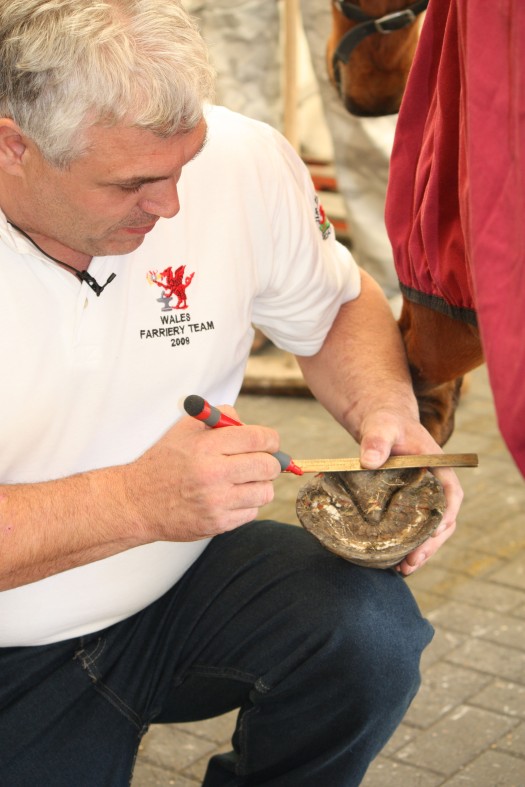 In our first ‘Farrier Focus’ we fire a few questions at Grant to give us an insight into who he is, where he has come from and where he is going…

Why did you decide to become a farrier?

“I decided to become a farrier after watching my horses being shod by Steve Langford AFCL who later became my Master. I was very fortunate because Steve was a member of the Welsh Farriers team and this exposed me to other’s who had a similar drive for excellence – the great Tommy Williams and Glyn David to name a few of the many Welsh farriers who influenced me.”

Who (or what) has been your biggest influence or inspiration in your career both within and outside the profession and how?

“My greatest influence came from my father who taught me how to work and this ethic has led greatly to my success, he has also been a great supporter of what I have done as a farrier. Yesterday he came over and struck for me to practice tooled and fullered hunter caulk and wedge hind for Calgary 2013.

There are so many farriers who have influenced me and helped set out the road to my success but to name one it would have to be Edward Martin FWCF, he seemed to be an inspiration to many as an ambassador to the industry. He had skills as a farrier, as a teacher of his craft and lived generously giving his best; he could be very humble. A highlight of my career was to take him on his last big trip to the AFA Convention and be able to listen to some of his wisdom.”

What’s the most unusual shoeing job that you have done?

“It would have to be shoeing long footed Arabian pleasure horses in Texas. It was work that could and would be judged by non farriers as the rules for shoeing included a maximum toe length and a weight limit for the shoes including the nails – breaking the rules meant suspension for the trainer and probably the sack from the job.”

What is the funniest incident you have experienced whilst at work?

“The very first time I was competing in the US where we had to weld a bar into an aluminium race plate. I had never used a gas torch before let alone welded aluminium and the steward could not hand me shoes fast enough to melt, lucky no one else needed one!
Or it could have been where I went to Barry Zoo to trim the donkeys, it took ages to drive them into the empty Elephant pen only to have them run out through the bars!”

If you didn’t become a farrier what do you think you would have done? (If you could do it all again would you be a farrier?!)

“My first want was to be a farrier and could not think of anything that could be better….except retirement but you need more income to do that as you have a full time job occupying yourself.”

What has been your highest point of your career so far?

“Having the opportunity to share my skills with the next generation of farriers.”

What has been the lowest point of your career so far?

“Having to shoe wet ponies standing in the mud under a tree, it was character building just hope it does not happen again, everyone should try it.”

What is the biggest regret you have in your career so far?

“Letting ‘Beanie’ (Steven Beane) beat me at Calgary repetitively, he is just a great farrier.. joking no regrets.”

What advice would you offer those just beginning their apprenticeship?

Be prepared to work very hard, you will only get out what you put into your apprenticeship and to have high expectations and goals for yourself. The Master is there to help teach you, not to do the work for you. There are a lot of hours in a week where you are not working, fill them productively with study and practice. Your exam will come much too soon.”

What advice would you offer those just starting up their own business?

“PUNCTUALITY, PRESENTATION of yourself, your tools and the work at the horse, COMMUNICATION with the owner or trainer; it’s their investment or pet you’re working with, it’s their money you will pay the bills with”

What’s your next goal?

“To be able to raise my kids to be good, hard working conscientious and very happy. ”

Why do you participate in farriery competitions?

“To try and keep my skills up to date or from declining too much, secondly to try and encourage the young farriers to be the next generation of teachers. There are no losers at a contest only the ones who will not put their work up for evaluation loose. It is another place to learn and develop camaraderie in the industry”

“Very similar as in past generations to me, the skills to shoe have not changed much and the best way to protect horse’s hooves was developed a long time ago. There are small changes but today’s tradition was yesterday’s innovation. There have been no leaps in horseshoeing just subtle changes as horses are asked to perform different tasks in different environments.”

What do you think is the biggest threat to the farriery industry?

“Apathy, with all that is happening inside the industry such as barefoot and the easing of standards for those entering the craft, we do need good representation and the BFBA (British Farriers and Blacksmiths Association) is the ideal organisation for us as individuals to have an opinion for the future of farriery. Alone our opinions will just be lost.”

What is your biggest concern for the farriery industry?

“Will my generation create an industry that will encourage the best from the young or just leave the industry floundering? Will there be enough work for the amount of young farriers we have in the industry, or are we about to have the first generation of part time farriers? If we have part time farriers standards will probably fall as there will be less commitment to our craft.”

What keeps you sane and motivated when you are having a bad day?

“There must be more good ones out there to have.”

Favourite past time away from hot steel and horses?

“Mowing the grass – it’s a great place to switch off.”

Trick or tip (please provide a trick or a tip, this may be shoeing, shoemaking or trimming or could be getting money out of bad payers or handling nervous horses)

Thanks for the insight into your life and career Grant.

Another Farrier Focus next week – stay tuned and subscribe to the blog so you don’t miss any.

If there’s a farrier you think you’d like to see featured, please let us know!